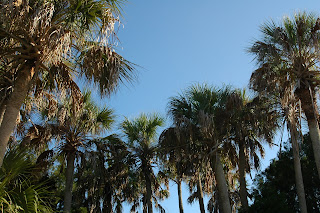 Florida has often been referred to as a paradise, partly because its abundance of beautiful palm trees. In classical versions of paradise like Atlantis and the Garden of Eden, palms are often a key element. Likewise, most iconic scenes of Florida include palms—holding the ends of a hammock on a sunny beach, flapping violently in hurricane winds, or silhouetted against a pastel sky of a smoldering Gulf sunset. But, as anyone who’s paddled Florida’s Gulf Coast lately can attest, there is trouble in paradise. Our cabbage palms are dying.

Palm die-offs have become all-too-common in recent decades. The first was in the 1970, when a disease called lethal yellowing devastated a huge percentage of South Florida’s coconut palms. However, as much as we love coconut palms, they are exotic and their loss is ecologically less significant than losing a native species like cabbage palms. Not only are cabbage palms native, they are an important element of the Florida landscape.

Historically, cabbage palms were used for food, fiber,, and for shelter. The classic Seminole chickee consisted of a cypress log frame covered by palm fronds. Paddlers in the everglades know these structures well. European settlers found plenty of uses for cabbage palms, too. Forts made of fibrous palm logs were uniquely able to absorb the impact of cannonballs. One palm-walled fort on Sullivan Island, South Carolina, was credited with saving Charleston from a British attack during the American Revolution. To commemorate this event, the cabbage palm was designated South Carolina’s State tree in 1939. Florida followed suit by naming the cabbage palm (also known as the sabal palm) as our State Tree in 1952.

Commercial use of cabbage palms has been limited. One of the more ambitious enterprises was a brush manufacturing plant built in Cedar Key in 1910. This factory made rigid scrub brushes from the fibrous “wood” of palm trunks. It was a relatively short-lived industry, however, and the overall impact on the regions palms was minimal. Of more importance has been the widespread harvesting of the trees central growth bud to make swamp cabbage. It was from this regional delicacy that the tree got its name. Another common name for this edible bud is “heart-of-palm.” This “heart” bud is the vital life-force of the tree. Removing it kills the tree. Harvesting swamp cabbage has fallen into disfavor in recent decades and is illegal on public lands. You can still order heart-of-palm salad in some specialty restaurants—most of it obtained as a byproduct of land clearing operations.

Perhaps the cabbage palm’s greatest value is aesthetic. The graceful sway of their smooth, grey trunk and large, fan-leaves bunched attractively at the top, is like no other tree. It is their presence, more than any other tree, that gives Florida’s coastal rivers and some inland waterways, their uniquely Florida appearance. And yet, they are so common, we sometimes become complacent about them. When that happens, we should read people like John Muir. “I caught sight of the first palmetto in a grassy place, standing almost alone…this palm was indescribably impressive and told me grander things than I ever got from human priest…whether rocking and rustling in the wind or poised thoughtful and calm in the sunshine, it has a power of expression not excelled by any plant high or low that I have met my whole walk thus far.” (Thousand Mile Walk to the Gulf. P. 92).

Carl Linnaeus, the “father” of the modern classification system of classifying species, was equally enchanted by palms, calling them the “prince of trees.” He felt that humans evolved in the land of palms and that we are essentially “palmivorous.”
With nearly 3,000 species worldwide, the huge Palmae family is well entrenched in every tropical and subtropical corner of the globe. They have a wide range of adaptations which include the largest fruit, largest inflorescence and longest leaves in the plant kingdom. With such adaptability, it’s a mystery why there aren’t more palm species in central and northern Florida. 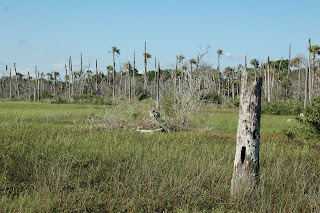 One answer is their toughness. Cabbage palms can tolerate colder temperatures than other palms, growing as far north as South Carolina. They’re also drought tolerant. While they prefer the damper conditions of coastal hammocks, pine flatwoods, and river forests, they can ride out an extended droughts with little problem. Their tough, leathery leaves are not prone to desiccation under Florida’s blazing sun and are unfazed by salt spray from the ocean. They can even tolerate growing in slightly brackish water—but not salt water. And therein lays the problem.

In the 1990’s, when coastal residents in the Nature Coast and Big Bend areas reported unusual numbers of palms dying, scientists first looked to the usual suspects. Lethal yellowing, while still killing many palms (coconuts and many other exotic species) every year, is not known to attack any native Florida species. Other diseases of cabbage palms such as the palm weevil, bud rot and Texas Phoenix palm decline (which primarily attacks Phoenix palms but also effects an occasional cabbage palm) were also ruled out.

As scientists worked on the problem, they made another, more troubling observation; hardwoods and other unrelated species were also dying. This implied the problem wasn’t a disease (which are usually specific to one species) but something environmental. Researchers, including George Agrios and Francis E. Putz of the University of South Florida's botany department and Ed Barnard of the Department of Forestry in Gainesville, eventually concluded that the culprit is something far more common than any disease—salt water.

For the past 16,000 years, as the earth has steadily warmed from the last Ice Age, water levels have been rising by about 0.6 millimeters per year. But, with additional atmospheric warming caused by the emissions of our modern, industrialized world, this rate has increased significantly. NASA scientists have determined the worlds sea levels are now rising about 3 millimeters per year.

In Florida, increased salinity of nearshore waters is being enhanced by a more local problem. With ever-increasing withdrawal of fresh water from the Floridan aquifer by wells throughout the state, less fresh water is reaching the coastal estuaries. Besides the fresh water that flows into these estuaries by way of surface runoff, the artesian (spring) water that previously entered from submarine springs is now diminished as well. 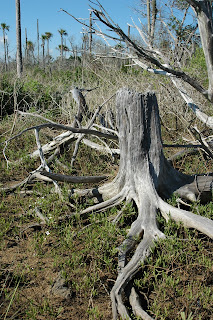 Perhaps the most alarming aspect of this pending natural disaster is the lack of public awareness. The areas most affected by this die-off are relatively remote. And, while many trees are dying in Tampa Bay and other populated areas, as well as some places along the Atlantic coast, the best places to see the full effect of this die-off are the quiet, uncivilized corners of the coast—the realm of the paddler.

So, as you paddle areas like the Nature Coast, Big Bend and the Florida Keys, be sure to take lots of pictures and spare no words when describing the environment in your journal. Hundreds of years from now, your words and images may be referenced by people describing a long lost paradise that, like Atlantis and Eden, was consumed by the sea. Sunbathers on Tallahassee Beach might gaze southward upon the wide expanse of the Gulf of Mexico and wonder if such a wonderful place could ever have existed at all.
Posted by Lars Andersen at 6:31 AM No comments: